Why the Rufous Hummingbird is the Toughest Bird on the Block

Colorful rufous hummingbirds, like this male, have amazing memories. They often seek out and stop at the same feeders and flowers during their annual migration routes.

If you reside in a northwestern state, like Washington or Oregon, and see a rumble break out at your backyard sugar-water feeder, a male rufous hummingbird is the likely culprit. Known for their aggressive nature, rufous males are particularly antagonistic during the late-spring breeding season when territories are being established. Female rufous hummingbirds also jump into the fray to protect nesting territories and to drive off other rufous that get too close. They’ve even been known to chase chipmunks away.

Rufous are hard to miss as they zip, zoom and dive around sugar-water feeders. Male rufous hummingbirds have orange backs and bellies and iridescent red throats, while females and juveniles sport more subdued green coloring. The Allen’s hummingbird, another species of the West, is often confused for the rufous. As a general rule of thumb, if the male’s back is more orange than green, it’s a rufous. Females and juveniles of both species are essentially identical.

During courtship, a male rufous dives in a J-shaped or steep oval pattern when a female enters his breeding territory. The male rufous doesn’t stick with one female, though, and pairs up with multiple partners throughout  a single breeding season.

That means the tough job of parenting falls entirely to the female rufous. She chooses a suitable nesting site and builds the small cup-shaped nest herself using plant matter, such as lichen, moss and bark. She then lays two white jelly bean-sized eggs. The mother feeds her two young until they’re ready to leave the nest, about 21 days after hatching.

In western and southwestern states, it’s easy to attract these feisty little birds with sugar-water feeders. Skip the red dye, though, and make your own by combining  1 part table sugar to 4 parts water. Plus: Beyond feeders, here’s how to attract hummingbirds to your backyard.

To keep the peace at backyard feeders, set up more than one and place each feeder at a distance and out of sight of the other. If multiple feeders are available, an aggressive rufous is more willing to share.

Another option is to plant a few nectar-rich red blooms, such as bee balm and penstemon. Tube-shaped blooms also work well.

Even if you’re outside their range, a rufous may still visit your yard. Of all western hummingbird species, the rufous is most likely to wander. In their southward migration in late summer and fall, rufous spread out across the western half of the continent, and some stray farther. They’ve been spotted in fall in every eastern state, and dozens spend the winter along the Gulf Coast. 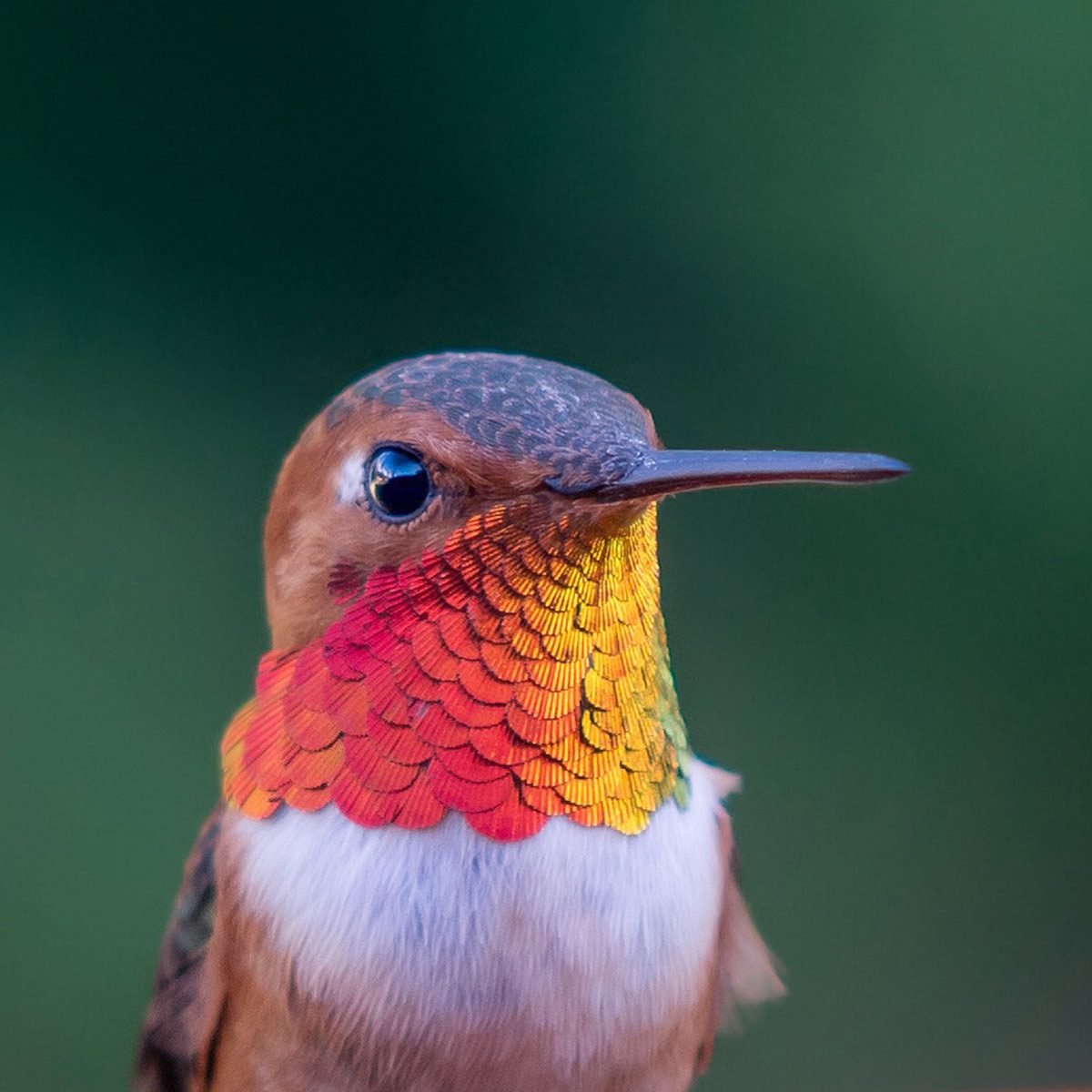 Many species migrate,  but rufous hummingbirds  are known for having some of the longest migratory journeys for birds of their size. Some individual rufous even migrate from Mexico to Alaska­—about 3,900 miles! To help it hover,  a rufous’ wings  beat at high speeds—as fast as 52 to 62 wingbeats  per second. 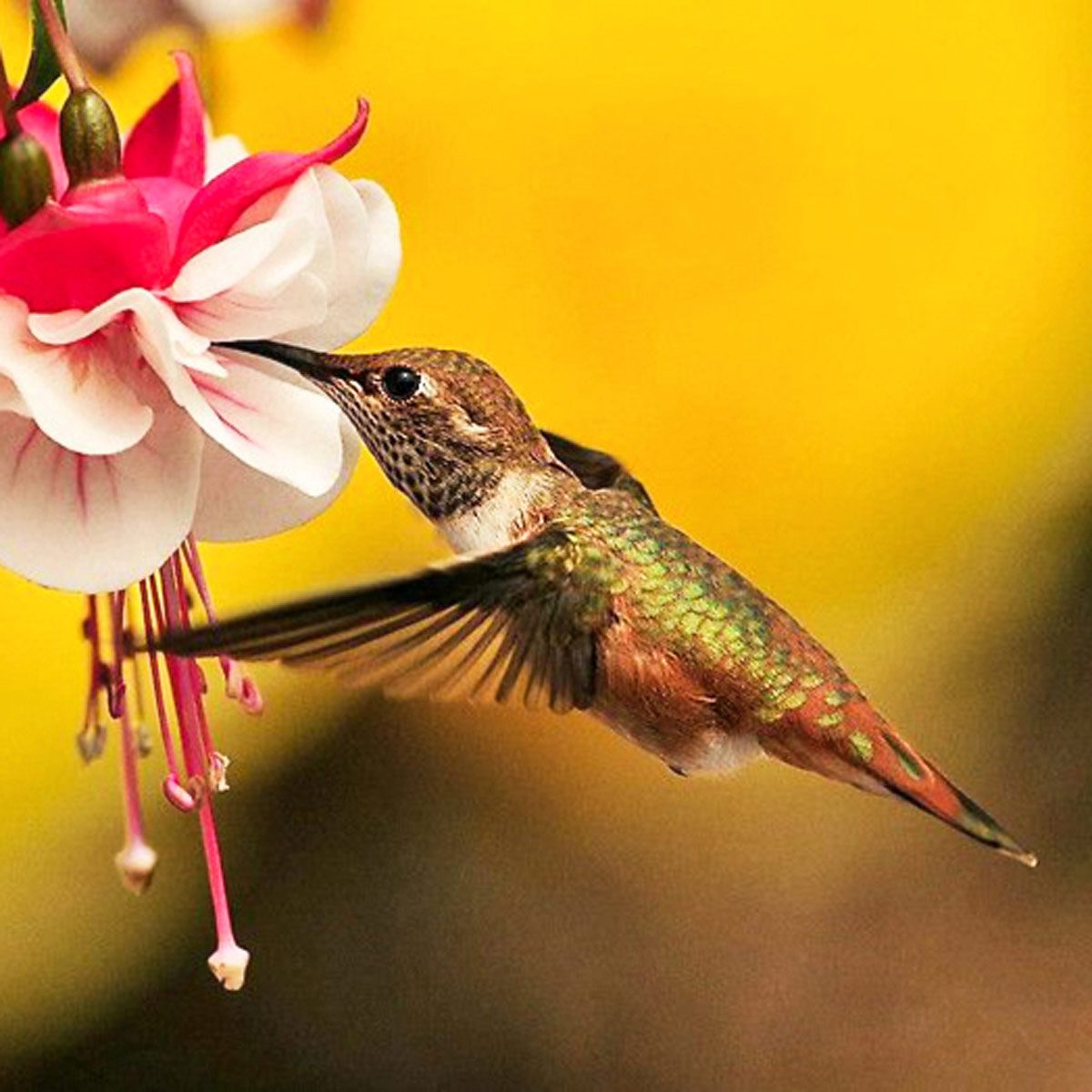 Photo: Courtesy of Marie Will Photography

The rufous is the only hummingbird species in the world whose breeding range extends as far north as southeastern Alaska. They feed on tiny insects, nectar and sometimes even tree sap throughout their journey. Plus: 9 expert tips for attracting hummingbirds to your backyard.

'Migrating with the Sandhill Cranes': Follow the journey
The Cultural History Of The Plastic Pink Flamingo