Early Northern New York history goes far beyond the bounds of stories of pioneer families and colorful guides. As archaeologists like to say, the Western Hemisphere was invaded, not discovered. Many different societies, civilizations, or cultures existed here long before Europeans crossed the ocean and discovered “new” lands.

The history of humans in the Americas is extensive. In general (and brief) terms, the Lithic stage ended about 8,000 BCE (10,000 years ago), followed by the Archaic stage, (ending around 1,000 BCE or 3,000 years ago), and then the Woodland Period, which extended to around the year 1500.  I mention this because certain North Country artifacts written about by scholars more than 100 years ago, were created during the Late Archaic or Early Woodland period, about three thousand years ago.

Upon their discovery in modern times, these objects were referred to as birdstones, and whether it was accurate or not, the name stuck. The majority were found east of the Mississippi River, within a 300-mile radius of today’s northern border of Indiana (these are generalities in terms of distance). The Great Lakes region — including western New York State, a hotspot of sorts — has produced many fine examples. Discoveries made elsewhere include finds in Clinton, Jefferson, and Warren Counties.

One artifact website calls birdstones “small but magnificent creations.” New York’s Metropolitan Museum of Art describes them as, “small, finely finished, oddly shaped objects, usually made of slate, but sometimes of a much harder or more highly colored stone.” Nearly all finished specimens had been highly polished, adding a certain elegance to their bearing.

Amateur and professional archaeologists have long been fascinated by these unusual creations, admired as objects of beauty despite their sometimes odd appearance. But the allure of birdstones is enhanced by a strong and lasting sense of mystery surrounding their purpose. Over the course of centuries, a range of possibilities have been hypothesized: adornments worn atop the heads of married or pregnant women; talismans used by conjurors; mountings for canoe prows; decorations to be worn necklace-style; objects used in games of chance; amulets worn for good luck; totems symbolizing certain clans; or effigies in honor of animals that provided sustenance.

Warren K. Moorehead (1866–1939), known in his heyday as the “dean of American archaeology,” became the number one expert on birdstones. Some of his important writing on the subject was performed in Saranac Lake at the turn of the century when he was recovering from tuberculosis. Moorehead noted in his books that many of the birdstones collected in the Smithsonian hardly looked like winged creatures. “While they bear a greater resemblance to birds than anything else, yet scarcely any two of them are alike, and they change in form through the whole gamut until it is difficult to determine whether it is a bird, a lizard, or a turtle, and finally the series ends in a straight bar without pretense of presenting any animal.”

While most specimens are made of slate, some consist of granite, shale, limestone, and other rock types, usually resulting in finished products that were brown, gray, or red. Nearly all birdstones had two diagonal holes, one drilled through each end of the base, clearly intended to aid in mounting them to some type of surface. But the truth is, no one can say with certainty what that surface was and what purpose the stones actually served. In his 1899 book, The Bird-Stone Ceremonial, Moorehead concurred with Professor Frank Cushing’s belief that at least some stones were intended for mounting to a flat surface. After continuing study, Moorehead revised that stance in The Stone Age in North America, published in 1910. “But now I do not believe this, for the reason that most bird-stones could not be conveniently tied to flat tablets.”

He also described two birdstone samples found in northern New York (see images). “Figure 18 is of trap rock and comes from Clinton County. It is rude, depressed, and has small ears. The general form is quite straight, but the tail is slightly raised…. The dimensions are 6⅞ long by 1½ inches high.

“Figure 15 is a remarkably fine bird amulet of green striped slate, the longest we have seen from New York…. It is 9⅞ inches from tip to tip, and of moderate height and thickness. It was found at Dexter, near the mouth of the Black River, and although in three pieces, was not otherwise defaced. The back is sharp, and it has projecting ears and a long neck. The head ends squarely. Another, from the same county, is also large, being 8⅝ inches long by 2 high. It has no projecting ears.”

In his later book, Stone Ornaments of the American Indian (1917), Moorehead expounded further on his favorite topic. “Among the most perplexing of polished stone artifacts are the so-called bird-stones. Of all polished implements, these approach more nearly zoomorphic forms, and yet remain so highly conventionalized that it is almost impossible to say whether the prototype is bird or beast. A beak-like face, however, gives the designation bird-stone…. The typical bird-stone has an arch-shaped cross-section in the body and a slightly raised head projecting from a short neck. The appearance is that of a swimming duck or gull with an expanded tail.”

And the drilled holes? “The perforations were probably made before the polishing was completed. This was done by drilling at a slant from opposite directions so that the holes met. These holes evidently were designed for the passage of thongs to hold the bird-stone to some base or to another surface.”

As he did in an earlier work, Moorehead again referred to specimens found in the North Country. “A description of some of the typical New York forms will give a general idea of the characteristics of the bird-stones of this region. A specimen of bird-stone with a long, projecting beak is found in the D. F. Thompson collection and comes from Hague, New York [on the eastern shore of Lake George]. The distance from the beak to the neck is about 5 cm., the body itself being about 8 cm. This specimen is narrower than most bird-stones, and the back is less angular at the ridge. The tail, however, is typical, though a little narrow….

“One of the most remarkable bird-stones that has come to our observation is from Plattsburg, where many unique specimens have been picked up. This specimen is of syenitic porphyry, and the surface does not show any degree of polish although the specimen is fairly smooth. The stone gives the appearance of a black background in which there are light blotches. The drilling is neat, and the bars made by the holes are small. The total length of this specimen is 10.5 cm.”

In the Smithsonian’s “Infinity of Nations: Art and History in the Collections of the National Museum of the American Indian” is another North Country example, described as an “Archaic popeyed birdstone, 3000–1000 BC, Watertown, Jefferson County, New York State.” Its purpose is also addressed: “These small sculptures were lashed to the shafts of atlatls, or spear-throwers, as weights. Their materials, often richly figured stone, are used to enhance their forms.”

That spear-related hypothesis is modified by Earl Townsend in Birdstones of the North American Indian (1959), the definitive work on these special objects. The book has a chapter titled, “The Atlatl Handle Grip Theory.” Several modern archaeologists agree with the idea, which posits that birdstones, described long ago as “comfortable in the hand,” formed the handles of spear throwers.

If that sounds strange, it’s actually very interesting, so bear with me briefly and you’ll be slightly amazed. It all comes together after watching a pair of short videos. But first, a very brief explanation. Civilizations throughout history have used spears for hunting. Many discovered that the speed and accuracy of a hand-thrown spear is dramatically enhanced by using a spear thrower (atlatl), which allows a projectile to be hand-launched with tremendous power. 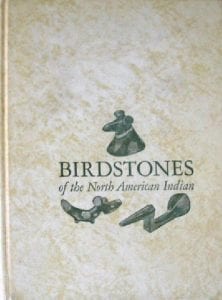 In the first video, you’ll see remarkable, fast-moving sequence of events
that demonstrate the creation and use of a spear thrower. The second video depicts a pair of weights on a thrower and explains their purpose. Watching these two films (and others available online) clarifies how birdstones could have been used by hunters, including those who populated the North Country a few thousand years ago, to maintain a steady supply of food.

And as the phrase “could have been” implies, the mysteries surrounding birdstones endure.

Lawrence Gooley, of Clinton County, is an award-winning author who has hiked, bushwhacked, climbed, bicycled, explored, and canoed in the Adirondack Mountains for 45 years. With a lifetime love of research, writing, and history, he has authored 22 books and more than 200 articles on the region’s past, and in 2009 organized the North Country Authors in the Plattsburgh area.

Below are more photos of birdstones: Article from the Adirondack Almanack.