The 6,000-Year History of Blue Pigments in Art

Of all the colors, blue is the most liked by both men and women. It’s no surprise, then, that many artists—Louise Bourgeois, Yves Klein, and Wassily Kandinsky among them—have expressed preference for it. According to psychologists, the popularity of the hue may take root in our evolutionary development. In the hunting-and-gathering days, those drawn to positive things—like, say, clear skies and clean water—were more likely to survive, and, over time, this preference for the color blue may have become hard-wired.

Yet, scientifically speaking, the sky and the oceans aren’t really blue—or at least not in the same way the soil is brown or leaves are green. This posed a big problem for most of art history. You can’t take the blue of the sky, grind it up with a mortar and pestle, then throw it on a canvas. Unlike certain reds, browns, and yellows, blue pigment isn’t quite as easily made.

Found in small supply and sought after voraciously, blue pigments carry a rich history of scientific invention, global trade, and artistic workarounds. From the first synthetic pigments created in Ancient Egypt to new hues discovered in the past decade, these are the highlights of the story of blue in art. 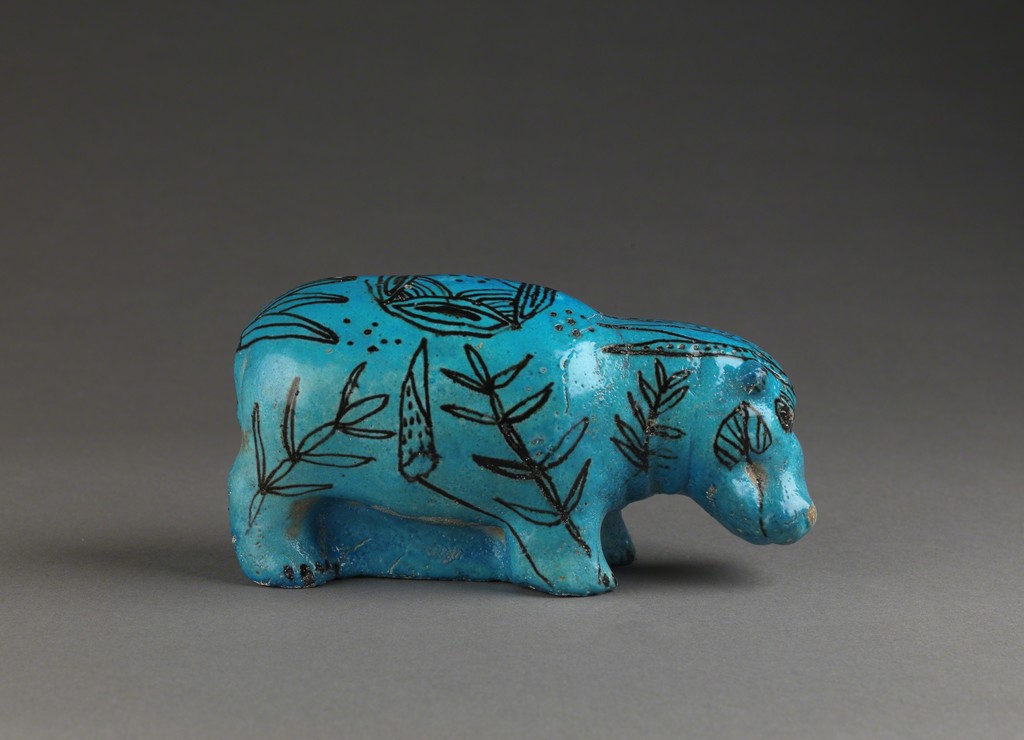 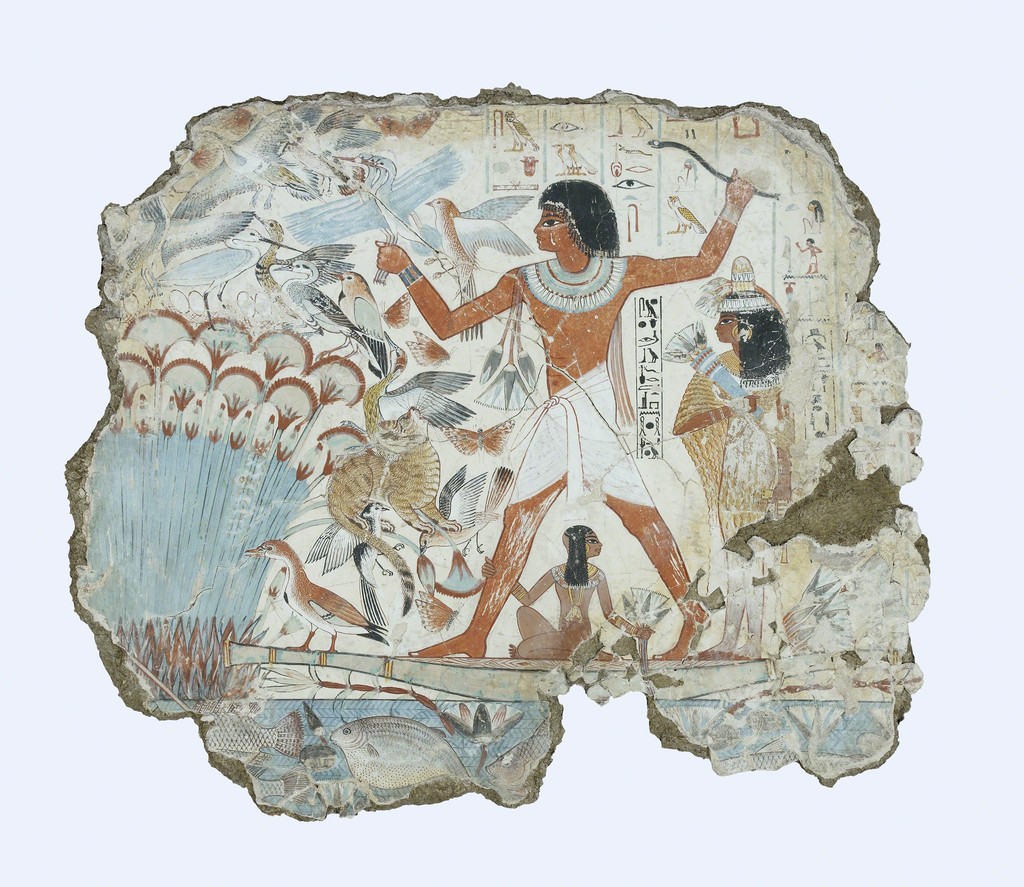 Egyptian blue—the first color to be synthetically produced—was invented in Ancient Egypt around 2,200 B.C., around the same time the Great Pyramids were built. To create the hue, Egyptians combined limestone and sand with a copper-containing mineral (such as azurite or malachite) and heated the solution to between 1470 and 1650 degrees fahrenheit. The end result was an opaque blue glass, which could be crushed up, combined with egg whites, glues, or gums, and made into a long-lasting paint or ceramic glaze. The process was easy to get wrong, and any mistake would result in a “glassy, green mess,” explains Victoria Finlay in The Brilliant History of Color in Art (2014). While Egyptian blue remained popular throughout the Roman Empire, its complex method of production was forgotten as new blues came to market.

In 2006, nearly two millennia later, conservation scientist Giovanni Verri made an accidental find that brought Egyptian blue back to the fore. Viewing a 2,500-year-old Greek marble basin under fluorescent lights, Verri was surprised to find that the vessel’s blue pigments began to glow—a signal that Egyptian blue emits infrared radiation. This rare property enables scientists to find traces of the color in ancient artifacts, even after the pigment has been washed away or otherwise made invisible to the naked eye. Scientists outside of the field of conservation have also taken interest in Egyptian blue, adopting the pigment for biomedical analyses and laser development. 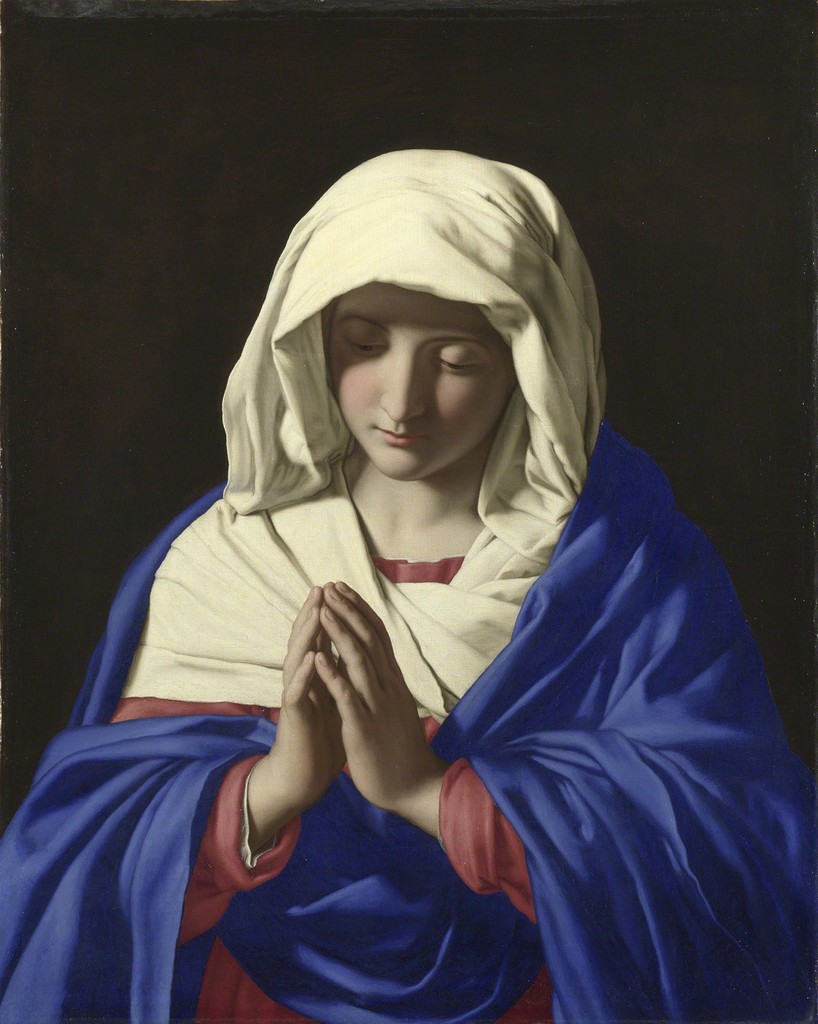 Sometimes called “true blue,” ultramarine is made from the semiprecious gemstone lapis lazuli, which for centuries could only be found in a single mountain range in Afghanistan. Egyptian traders began importing the stone as early as 6,000 years ago, using it to adorn jewelry and headdresses. Yet they never figured out how to make a vibrant pigment from it. Riddled with minerals such as calcite, pyrite, augite, and mica, lapis loses its potency when it is ground up, turning from a bright blue to a dull gray.

Lapis first appeared as a “true blue” pigment in the 6th century, gracing Buddhist frescoes in Bamiyan, Afghanistan. Around 700 years later, the pigment traveled to Venice and soon became the most sought-after color in medieval Europe. For centuries, the cost of lapis rivaled the price of gold. Given its hefty price tag, the color was reserved for only the most important figures (namely, the Virgin Mary) and the most lucrative commissions (namely, the church).

Legend has it that Michelangelo left his painting The Entombment (1500–01) unfinished because he could not generate the funds to buy ultramarine blue. Raphael used the pigment scarcely, applying it above base layers of azurite when depicting the Virgin Mary’s blue robe. The Baroque master Johannes Vermeer, on the other hand, bought the color in spades, so much so that his indulgence pushed his family into debt.

Given the high demand, in 1824, France’s Societé d’Encouragement offered a reward of 6,000 francs to anyone who could invent a synthetic version of ultramarine. A French chemist and a German professor both found the solution within weeks of one another, leaving the competition with contested results. Unsurprisingly, the French committee gave the award to the Frenchman and named the new pigment “French Ultramarine.” 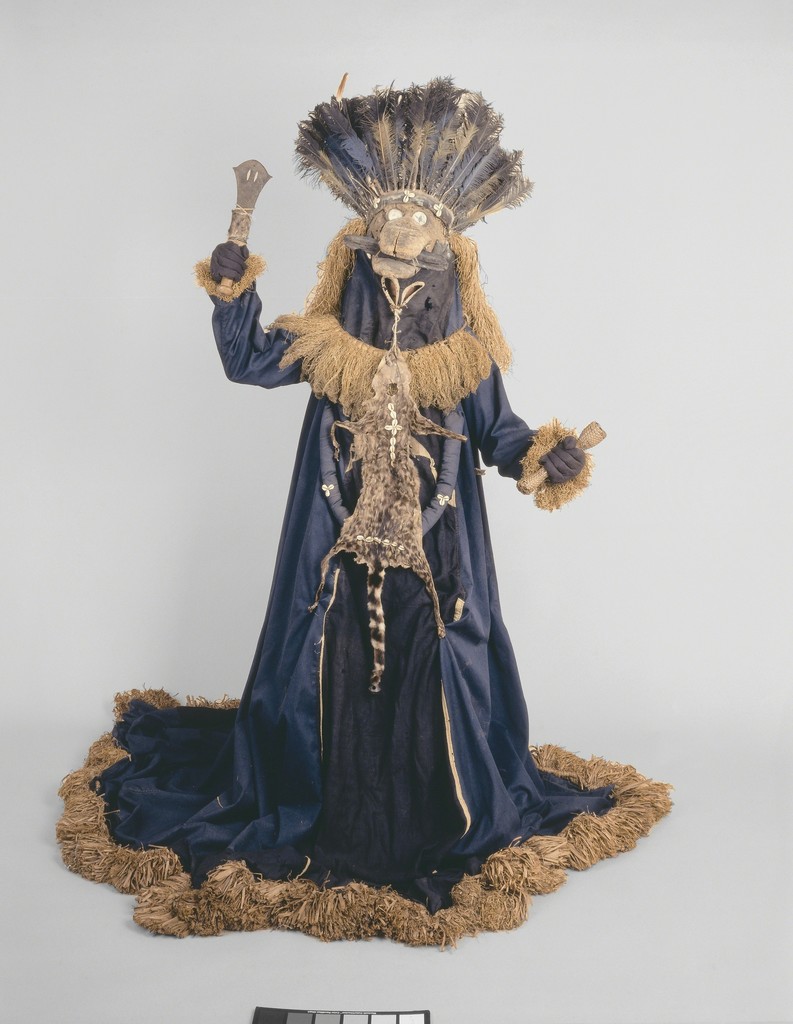 The colors of the rainbow (a.k.a. Roy G. Biv) have a clear outlier: indigo. Commonly considered a shade of blue, indigo is not a separate color in its own right, so why does it get its own band in the color spectrum?

Indigo was a desired import throughout the 17th and 18th centuries, driving trade wars between European nations and the Americas, fueling the African slave trade, and even partially funding the American Revolutionary War. A natural dye rather than a pigment for painting, indigo was used to color fabrics, clothing, yarns, and luxurious tapestries. Unlike lapis lazuli, whose rarity drove its high prices, the indigo crop could be grown in excess and produced across the world, from India to South Carolina.

Indigo dyeing was especially popular in England, home to physicist Sir Isaac Newton. Newton, who introduced the term “color spectrum,” believed that the rainbow should consist of seven distinct colors to match the seven days of the week, the seven notes in the musical scale, and the seven known planets. Confronting the fact that the rainbow only displayed five unique colors, Newton pushed indigo, along with orange, much to the dismay of some contemporary scientists.

Synthetic indigo, developed in 1880, largely replaced the natural crop by 1913; this is the pigment that dyes your blue jeans. Over the past decade, scientists have introduced a competitor to the market: Escherichia coli bacteria that is custom-engineered to produce the same chemical reaction that makes indigo in plants. This method, called “bio-indigo,” will likely play a big part in the environmentally friendly denim of the future. 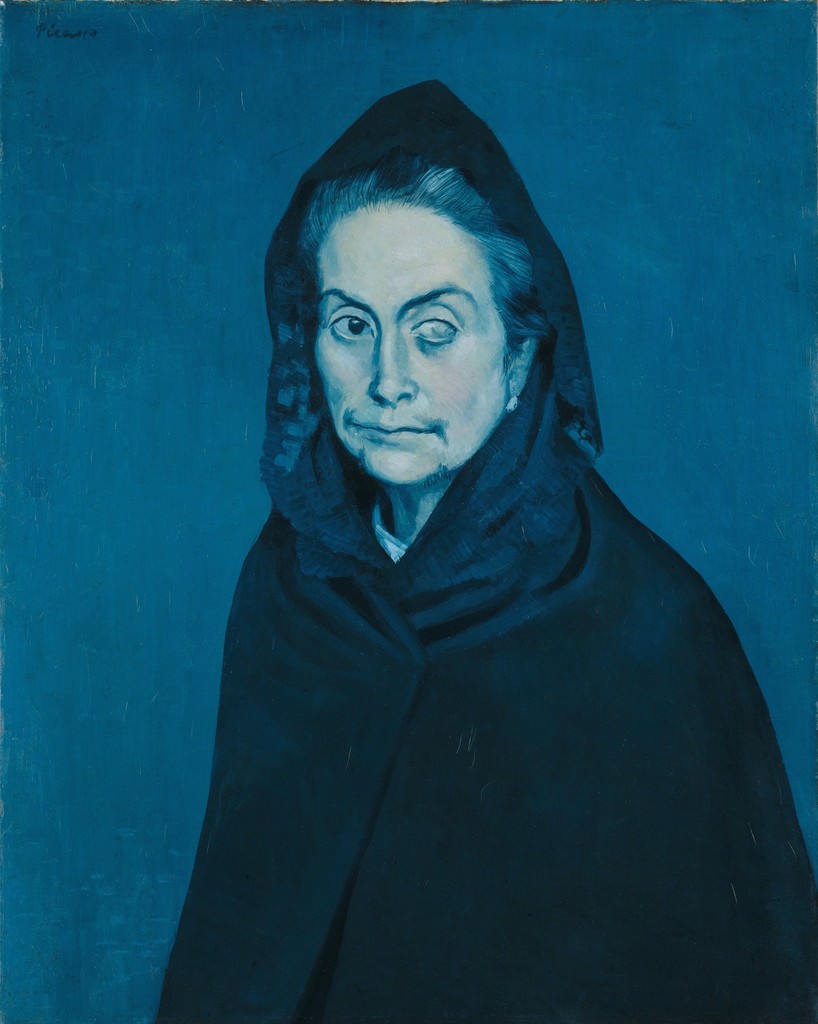 One year before Newton published his first report on the seven colors of the rainbow in Opticks (1704), a new blue was invented in Berlin, Germany. The dye-maker Johann Jacob Diesbach was working on a cochineal red pigment when he disregarded the fact that one of his materials, potash, had come in contact with animal blood. He figured that red mixed with red would simply create more red. Surprisingly, this was not the case, and his red dye emerged as a potent blue. The animal blood had spurred an unlikely chemical reaction, which created the compound iron ferrocyanide, now known in German as the color Berliner Blau or, in English, as Prussian blue.

French Rococo painter Jean-Antoine Watteau, Japanese woodblockprintmaker Katsushika Hokusai, and the Spanish master Pablo Picasso in his Blue Period all used the color extensively. However, the success of Prussian blue goes beyond its role as a pigment. In 1842, the English astronomer Sir John Herschel discovered that Prussian blue had a unique sensitivity to light, which could be manipulated to create copies of a single drawing. Herschel’s method of image reproduction proved invaluable to architects, who for the first time could easily create multiple versions of their building plans, aptly named “blueprints” after their Prussian blue coloring. In contemporary medicine, Prussian blue has a very different purpose: It’s delivered in pill form as an antidote to heavy-metal poisoning. 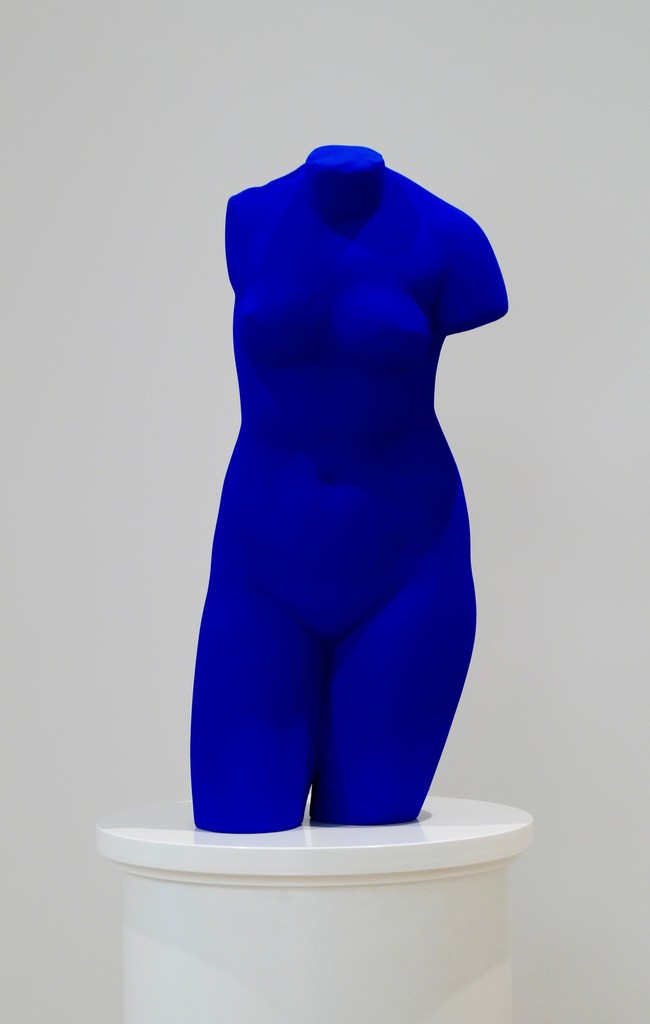 In the summer of 1947, French artist Yves Klein was just 19 years old, sitting on the beach with his friends Claude Pascal (who later became a poet) and Armand Fernandez (who later became an artist). As the story goes, the three of them began to brainstorm how they would divide up the world: Pascal would take the air, Fernandez would have the land, and Klein wanted the sky. Klein’s pursuit of the sky’s expansiveness would come to define his artistic career, and, in 1957, he began to work almost exclusively with the color blue. “Blue has no dimensions. It is beyond dimensions,” he once said. The artist began by spraypainting entire canvases, everyday objects, and casts of ancient sculptures with French Ultramarine, which had been invented about a century before. Working with a paint dealer in Paris, Klein created a matte version of ultramarine and patented his new method of pigment production under the name International Klein Blue, or IKB, in 1960.

While Klein is perhaps the most famous painter to riff on ultramarine, one of history’s most expensive pigments, he is far from the only one. Inspired by Klein, the filmmaker and author Derek Jarman created the moving picture Blue (1993), which projected the same shade of ultramarine blue for 75 minutes, punctuated by a haunting soundtrack of ticking clocks, choral singing, and poetry and storytelling recited by actors and Jarman himself. More recently, in his installation Seizure (2008/2013), the British artist Roger Hiorns covered an abandoned London apartment with bright blue crystals, while the German artist Katharina Fritsch presented Hahn/Cock (2013), a giant sculpture of a rooster painted bright ultramarine in Trafalgar Square.

Prussian blue is not the only blue pigment to be discovered by accident. In 2009, the chemist Mas Subramanian and his students at Oregon State University were investigating new materials that could be used for manufacturing electronics. A graduate student noticed that one of their samples turned a bright blue color when heated, to which Subramanian responded, “Luck favors the alert mind,” a quote from Louis Pasteur. They named the color YInMn blue, after its chemical makeup of yttrium, indium, and manganese, and they released the pigment for commercial use in June 2016. Durable, safe, and easy to produce, the color also has a cooling property, so it may be used in environmentally friendly roof construction in the future. Of course, Subramanian sent samples of the pigment to artists, too.