The Freedom Sculpture, is a “Statue of Liberty” for the West Coast — It is an Iranian-American led, widely crowd-supported public monumental gift, inspired by the humanitarian ideals of freedom, respect for cultural diversity and inclusiveness that originated with Cyrus the Great of Persia 2,500 years ago and which have been enshrined in the U.S. Constitution for all by the Founding Fathers. The Freedom Sculpture was officially unveiled in a citywide celebration on July 4th, 2017. It will stand forever in the heart of Los Angeles, as a reminder of the universally shared values that truly make America great.

On July 4th, 2017, the Freedom Sculpture was unveiled before a record crowd of over 75,000 people to music and fireworks. It will now stand forever in the heart of Los Angeles as a symbol for religious freedom, cultural diversity and inclusiveness — attributes that Los Angeles embodies as a city, and that California Upholds as a State!

It took 4 years for the Farhang Foundation, a non-political, non-religious, non-profit Iranian-American cultural organization, to commission, secure city authorization and raise enough money build and install the Freedom Sculpture, a permanent iconic monument celebrating religious freedom, cultural diversity and inclusiveness — the humanitarian ideals or Cyrus the Great that have been enshrined by the Founding Fathers in the Constitution of the United States.

With over a million supporters, from all across America and over 50 countries around the world, the Freedom Sculpture has become the most widely crowd-supported monumental gift in U.S. History.  It now stands like a “Statue of Liberty for the West Coast”, in the heart of Los Angeles, one of the world’s most culturally diverse cities, as a permanent symbolic reminder that freedom, inclusiveness and respect for diversity are the foundational values that truly make America great.

Until Nov 1st, 2017, every person who supports the Freedom Sculpture, no matter to what dollar amount will have their name added to the online supporters wall, and be forever listed as part of the permanent legacy of this soon-to-be national landmark.

The winning design of the Freedom Sculpture was created by renowned artist and architect Cecil Balmond. It is themed on the Cyrus Cylinder from 2,500 years ago, widely considered the first declaration of human rights, whereby Cyrus the Great Persian King originally granted individual and religious freedoms to all within his vast and culturally diverse empire.

The large-scale, modern-day sculptural interpretation of the Cyrus Cylinder is made of two finely crafted 100% stainless steel cylinders, one within the other. The interior cylinder is gold, and the outer element is silver – both interacting with each other in an exchange of strength and vulnerability. The two rings are linked internally to form a strong and robust structure.

The ring shapes are not solid, but appear to be moving lines of a script. The artist intended the sculpture to be viewed by speeding traffic, to give an illusion of movement from all angles – completely unbounded and kinetic in nature – a contemporary metaphor of the universal message of the Cyrus Cylinder traveling through time and space.

In the daytime, the sculpture will sparkle with natural sunlight, and at night, the gold interior cylinder is illuminated by LED lights. The experience for each viewer will be unique and change upon every visit as the artwork is not separate from its environment.

Cecil Balmond OBE, ARTIST, ARCHITECT & ENGINEER,
is widely considered to be one of the most significant creators of his generation. An internationally renowned artist, architect and engineer, Cecil transcends the conventional boundaries of discipline – working in the crossover between art and science. Before setting up Balmond Studio in 2011, Balmond was Deputy Chairman of Arup, and ran the critically acclaimed design group, AGU (Advanced Geometry Unit). His pioneering work with the AGU, and collaborations with internationally-renowned architects, brought Balmond’s unique design philosophy to the global stage. He is the recipient of many awards including: Thomas Jefferson Foundation Medal in Architecture (2016) and Officer of the Order of the British Empire for Services to Architecture (2015). Cecil’s winning design was selected amongst over 300 worldwide entries for the Freedom Sculpture Design Competition.

The design of the Freedom Sculpture was inspired by the Cyrus Cylinder, an ancient artifact from 2,500 years ago, widely considered the first declaration of human rights. The Freedom Sculpture is evocative of this artifact with its design as an allusion to Cyrus the Great and his impact on the Founding Fathers of America.

Cyrus the Great was a direct inspiration to the Founding Fathers of America, who put his humanitarian ideals of individual freedoms, respect for other religions and multicultural inclusiveness into the core of the U.S. Constitution. 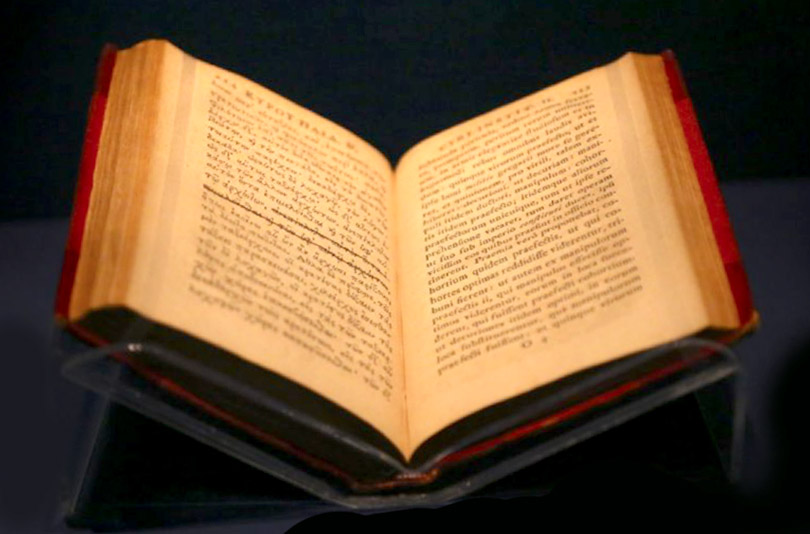 Thomas Jefferson’s Cyropaedia on display at Arthur M. Sackler Gallery of Smithsonian’s Museum of Asian Art
Thomas Jefferson owned multiple copies of the Cyropaedia – a semi-biographical account of Cyrus the Great as the ideal leader, written by the great Greek historian Xenophon – which popularized his methods for humanitarian governance among the world’s intellectuals and statesmen. One of Jefferson’s copies is said to have been heavily annotated, meaning that he was paying very close attention to it’s contents. John Adams, who also is said to have owned multiple copies, corresponded with his son about the Cyropaedia. And, Benjamin Franklin also had a copy in his library and was also known to be a fan. Finally, George Washington has been likened to a modern day version of Cyrus also owned a copyand was thus aware of the methods of this great ancient Persian ruler.

So, since at least four of the core Founding Fathers were documented fans of Cyrus the Great and his methods of governance, it is no wonder that, when they were drafting the U.S. Constitution, they incorporated many of Cyrus’ core principles of governance, like separation of church and state, the freedom of religion, freedom of speech, and freedom of assembly, into its core.

Inspired the the Cyrus Cylinder from 2,500 years ago (538 B.C.), the Freedom Sculpture is composed of two concentric cylinders of symbolic mathematical script, with an outer cylinder of silver, protecting an inner secret of gold that is illuminated at night with LED lights which make it glow from within.To echo the universal and timeless humanitarian values of Cyrus the Great, the symbolic script of the Freedom Sculpture is generated and regulated by the mysterious but immutable law of Prime numbers, 2, 3, 5…Prime numbers have long been associated with universality and mysticism, because they occur both, at seemingly random intervals, and with surprising regularity.

With over 1 million people from more than 50 countries supporting its creation by the time it is officially gifted, the Freedom Sculpture will be the most widely crowd-supported public monument ever gifted in U.S. History. (10x more supporters than the Statue of Liberty!)

The Freedom Sculpture stands in the heart of Los Angeles, at one of the world’s most prestigious and highly trafficked locations in the city, in a public transport median on Santa Monica Blvd at the intersection of Century Park East at the gateway to Beverly Hills. “The Freedom Sculpture is the ideal monument to represent what California embodies, a state which actively embraces and values diversity.” CA Governor, Jerry Brown

Farhang Foundation is a non-religious, non-political, and not-for-profit foundation established in 2008 in Los Angeles, to celebrate and promote Iranian art and culture for the benefit of the community at large.
http://www.freedomsculpture.org