The unveiling of the portraits of President Barack Obama and First Lady Michelle Obama has created an unprecedented surge of interest in both portraitists, especially Amy Sherald, whose work was relatively new to the market before her commission.

For Sherald, a 44-year-old Baltimore painter who produces roughly a dozen works a year, the demand is so strong it’s basically blown up the waitlist for her paintings, which had been growing ever since demand spiked for the artist’s limited number of works, following her first solo show at Monique Meloche Gallery in Chicago in 2016.

“We don’t even say the word ‘waitlist’ here anymore. There’s not even a waitlist, we just say there are conversations to be had,” said her Chicago gallerist Monique Meloche. The gallery has been fielding around 50 inquiries a day since the portraits were unveiled on Monday, up from a dozen a day since Sherald was awarded the commission to paint Michelle Obama in October.

To be sure, Meloche said, not every one of these swarms of inquiries comes from a serious buyer. However, she has heard from collectors from places such as the United Kingdom, South Africa, Canada, Mexico, and across the United States, including major established collectors with whom the gallery has not yet worked, as well as a few art-collecting celebrities. Sadly, for at least some of those would-be buyers, the list of people who want a Sherald painting now surpasses the artist’s expected lifetime output given the pace at which she produces. Sherald’s output is mostly due to her difficulty finding the right subjects for the portraits, Meloche said, and also to her health. Sherald lives with a replacement heart after getting a transplant in 2012.

Meloche has no hard and fast rules on how to handle the overwhelming demand, but said the priority for Sherald is to see the works eventually land at a public institution.

Meloche has tried sourcing works from Sherald’s earliest collectors to free up supply, but no one is willing to part with a painting. They tended to be long-time supporters of the gallery, who bought her works for between $8,500 and $10,000. (Sherald had sold some of her work herself before she started showing with Meloche’s gallery, a relationship that began with a group show in 2015 and the solo show the following year.)

The lucky early buyers included collectors in Chicago, one from Seattle, and a collector in Sweden who could not make it to Chicago see the work in person, but trusted Meloche to buy from the electronic image. At Chicago’s art fair Expo Chicago in 2016, two works by Sherald were pre-sold to collectors, but museums expressed strong interest. By spring of 2017, her works sold for $35,000 at a pop-up show in New York’s Lower East Side during Armory Week, and in December, following the announcement of her presidential commission, they’d reached $50,000 at Art Basel in Miami Beach. 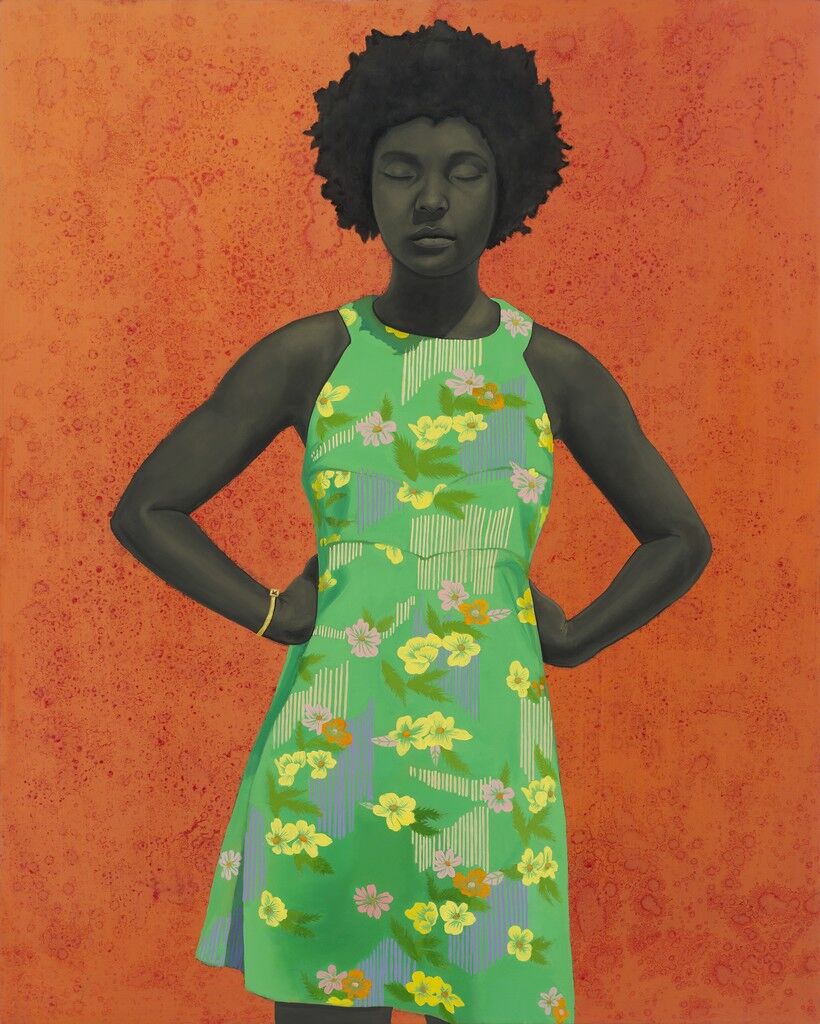 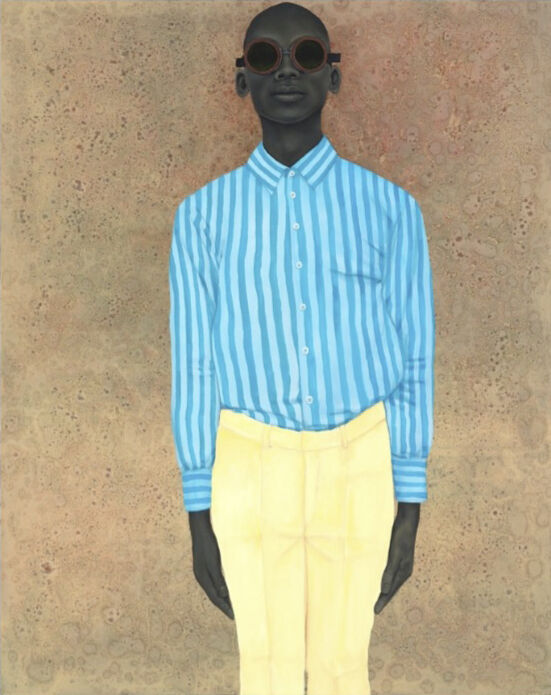 The Boy With No Past, 2014
The Studio Museum in Harlem,  Amy Sherald

Meloche had first encountered Sherald’s work back in 2014, at the recommendation of former NBA player and college basketball coach Darrell Walker, an avid art collector. She saw the work online, met Sherald a few times at art fairs, and eventually invited her to the aforementioned group show in 2015. The images she had seen online were compelling enough, but when the first painting arrived in Chicago for the 2015 show, “there was an audible gasp from all of us” as they unwrapped it.

“They do read well electronically, but when you see them in person, you see how sculptural and monumental they become,” Meloche said.  “I’m kind of kicking myself that I didn’t make it earlier to Baltimore,” she said, to see the work in person, because she would have started working with Sherald even sooner.

After seeing the work in person, Meloche asked Sherald how long she needed to prepare a large enough body of work for a show. Sherald said “a year?” and they put it on the books for the following year. In 2016, Sherald also won the prestigious Outwin Boochever Portrait Competition put on by the National Portrait Gallery and by 2017 had her work shown in and acquired by multiple museums around the country.

In the summer of 2016, she was put onto a shortlist for the presidential portrait. Her selection on the list was so last-minute and came so early in her career that she went to her interview with the Obamas carrying an Office Depot binder filled with reproductions of a selection of her paintings to date, her CV, and an essay by Dawoud Bey, since she did not have a published catalogue. At the unveiling, many critics were quick to say her portrait outshone that of Barack Obama’s portraitist, the more established artist Kehinde Wiley, whose work sells for between $100,000 and $500,000, according to his gallerist Sean Kelly.

Both Meloche and Kelly said it is too early to discuss price adjustments based on the overwhelming response to the unveiled portraits.

“It’s been 48 to 72 hours,” said Kelly on Thursday. “I think anybody who responds to anything within that time frame would be prone to mistakes. We’re fairly measured.”

Wiley, like Sherald, chooses his subjects carefully, and President Obama was his first commissioned portrait. Kelly said many of the inquiries coming in are for commissions, but he was not sure “if that’s something [Wiley] particularly wants to pursue or not.”

Meloche declined to comment on the fee Sherald received, but said she was more than adequately compensated given her current market prices. 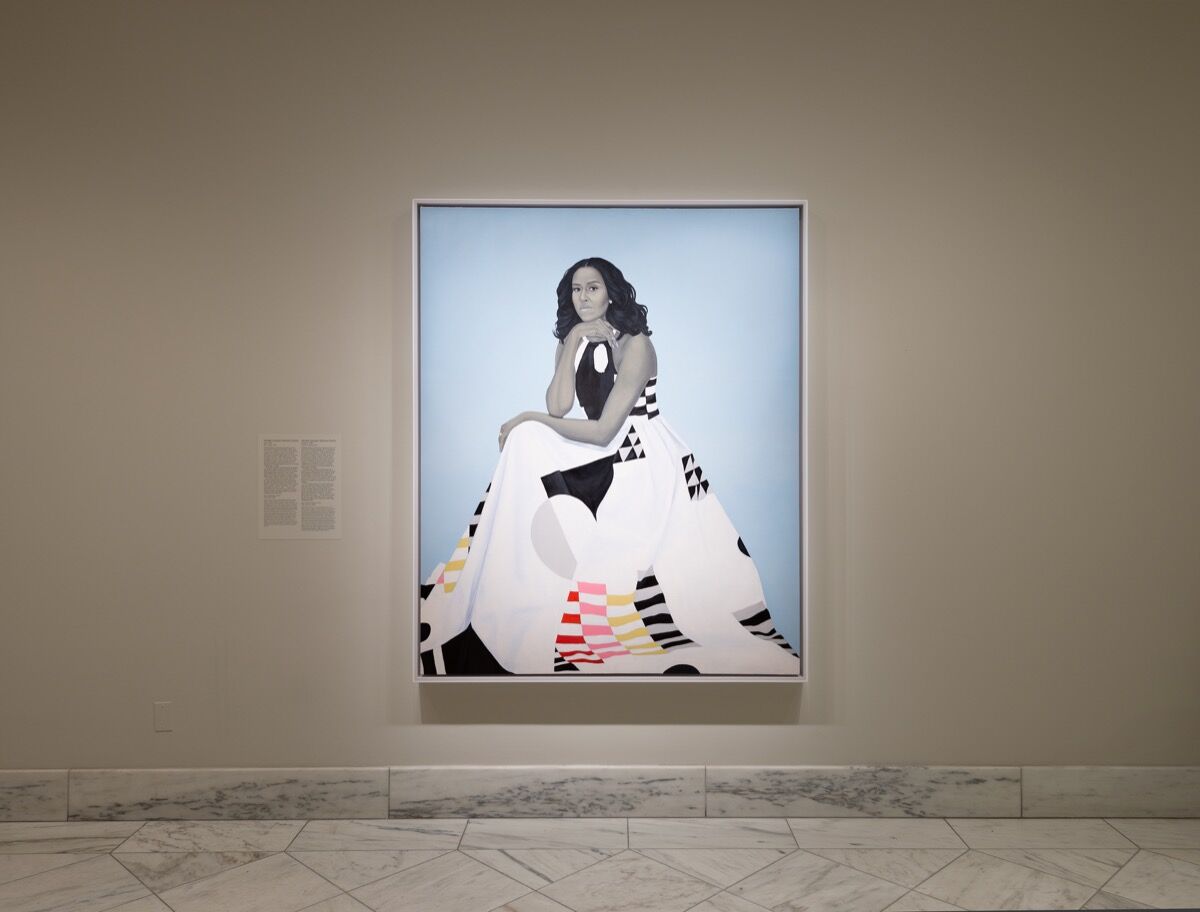 So what is a desperate collector to do? Sara Friedlander, head of post-war and contemporary art at Christie’s in New York, said she’s been getting about half a dozen calls a day since the October announcement, mostly for Sherald’s work.

“The art world loves nothing more than not being able to have access to something,” Friedlander said, noting that collectors in general have returned to figurative painting after a few years coveting abstraction from the likes of Mark Bradford and Joe Bradley.

Friedlander added that a lot of the interest was coming from people who think of the Obamas “as American royalty,” or put another way, from “Americans who are dissatisfied by the current administration,” she said with a laugh.

While Friedlander said she does not believe Sherald’s market is hers to make—she would encourage those seeking out one of her paintings to spend more time with and learn more about her work, seek out her gallery, and go see upcoming shows—she acknowledged that Sherald’s first appearance at auction, were it to happen, could be extremely lucrative.

“It depends on the painting,” Friedlander said, “but there are people who have been on the waitlist for a very long time, who are committed to her work, who love the Obamas, then there will be the speculators…I think the sky’s the limit.”

“It’s insane,” Meloche said, of the demand she’s seeing. “There’s no rulebook for this.”